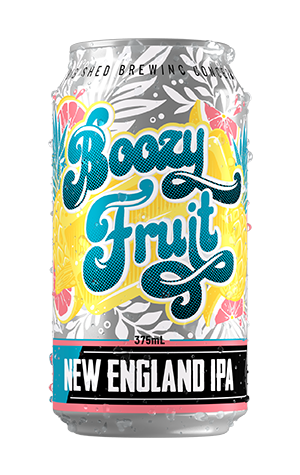 It was a stinking hot day in the Royal Park brewery, with the Big Shed heating up quickly. The brewhouse there is a pretty manual affair and the brewers’ clothes were drenched with sweat. Being a good boss, co-founder Craig Basford nipped out to the local shops to grab some Frosty Fruit ice blocks to cool the brewers down. The idea sparked a conversation:, “Let’s have a crack at a Frosty Fruit style beer for GABS.”

The rest is history, with the Big Shed crew taking out the 2018 GABS People's Choice title. Following the victory, the beer was quickly re-brewed and this time bottled. The beer proved to be so incredibly popular the first run of bottles sold out within four hours at the brewery while they apparently went through seven kegs of the beer at the Beer & BBQ Festival. And that was in conditions about as far removed from a hot Adelaide summer's day as you can imagine...

The key challenge for the brewers in making this beer was to get the required sweetness without making the beer too sweet and milky. Boozy Fruit is a New England style IPA, Boozy pouring an incredibly murky yellow, not dissimilar to pineapple juice. A cocktail of fruity hops combine to create a summery, juicy aroma, with pineapple leading the way again. You'll pick up a touch of sweetness from the lactose, something that blends well with the fruity hops in a relatively full-bodied beer with a smidgen of lingering sweetness to meet the Frosty Fruit brief.