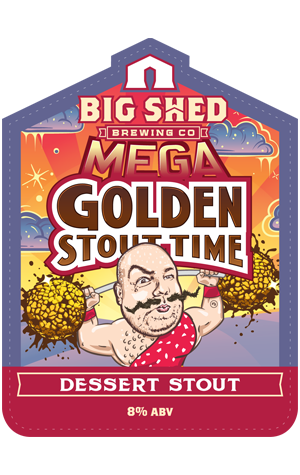 Big Shed's original Golden Stout Time shot to fame after it rated highly in the People's Choice at GABS 2015 and has gone on to become one of their most popular beers [One of the most viewed beers on our site, according to the check we did for one of our ten year anniversary features – Editor]. Here, it's received an injection of steroids to boost it to 8 percent ABV and become Mega Golden Stout Time. Its original release actually predates this post – when GABS 2020 was postponed, the festival team put together mixed packs for Dan Murphy's with Mega GST inside – but now it's been made available more widely.

First impressions are of what's definitely a supercharged sweet ice cream stout – with a lot going on. Big, sticky caramel, toffee, vanilla and honeycomb aromas perpetuate well into the nasal cavity, latching on then hanging around the inner nooks of one's schnoz. Honeycomb and caramel flavours are joined by lashings of dark chocolate, a little cream and a subdued vanilla flavour, while booze warmth is restrained but still ever so slightly present on the back palate. Thick, syrupy, silky of texture, it's dessert in a glass.