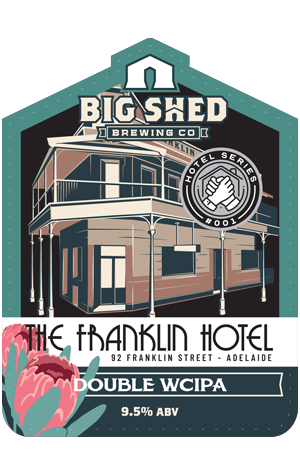 Big Shed have a pretty diverse range of beers, one that's spread across their core range, seasonals, limited releases and the Brewers Series. To those can now be added a new line as they team up with the crew from the Franklin Hotel under the "Hotel Series" banner. The end result is a 9.5 percent, 90 IBU double West Coast IPA that's loaded with hops, hops and more hops, and is set to be the first of many venue collabs.

The Franklin Hotel is a 19th century hotel in Adelaide's CBD which has been swimming in good beer for some time now, but the flood of quality stuff flowing through their taps has grown ever stronger since long time bar manager Lee Farrell and his wife purchased the property in 2019.

The Double West Coast IPA arrives to add its own ripple via a melody of pine, citrus, peach and floral aromas that sit above a dark orange, almost copper coloured beer. The balance is perfect here, with a slightly sticky, sweetish crystal malt character the equal of the hop-derived candied orange peel, supporting pine and fleshy peach. The sweetness has the effect of toning down the bitterness a little, while leaving enough for the style.