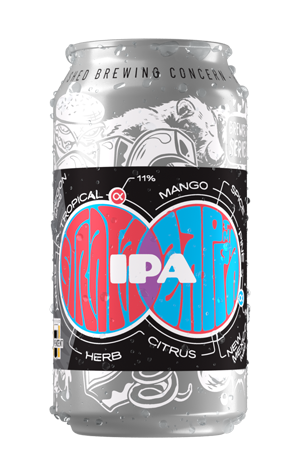 The Big Shed brewing team has started 2021 with a bang, wasting no time in releasing their first limited release. They've called upon two big-hitting new hops to impart their oily goodness into a West Coast style IPA too. Strata and Zappa were among the US varieties causing a buzz in the beer industry in 2020; the former Strata is the progeny of Perle, which has its origins in Germany but is also grown in the States, while Zappa was discovered in the wild and is native to North America.

The combination of two punchy – and, in the case of Zappa, quirky – hops leads to some powerful aromas and flavours: serious pine on the nose alongside a decent earthiness, some mango and a little orange citrus. The pine follows through on the first sip, dominating by a distance. However, the beer's fruitier side, and a smidgeon of something herbal, sneak their way in too. The super clear, burnt orange IPA has a bitterness that's noticeable, a mouthfeel that's thick and full-bodied where you'll pick up a little toffee, caramel, and a bready sweetness, yet the balanced 38 IBUs ensures the finish is quite dry.