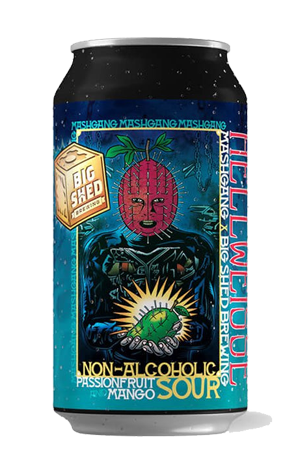 Big Shed are no strangers to the zero-alcohol space, launching an easy-drinking tropical pale, aptly named Desi Driver, in 2021. But as the market and demand grows, they've started to expand their range via a limited release collaboration, in this case teaming up with UK’s Mash Gang to punch out a non-alc mango and passionfruit Berliner Weisse. Mash Gang are well known for brewing beer without the booze, and as beers in this style are generally lower in ABV anyway, it seemed an obvious choice, with the pair utilising Lachancea, a new low alcohol yeast strain, and fruit purée added after fermentation.

While the non-alc marketplace has become ever-busier over the past year or two, this is a rarity, joining Molly Rose's Strawberry Sublime (which made out Best New Victorian Beers Of 2021 lineup) in the realm of non-alcoholic Aussie sours. The fruit makes a great first impression with loads of earthy mango on the nose and a little sweet passionfruit taking a backward step.

The sourness is restrained, not imposing, instead acting as a refreshing balance between the two fruit additions. There's a little dry tang in the aftertaste of a beer that's sprightly and a little fuller in body than most other beers in the category. It may well only have been a matter of time, but it looks like the wave of limited release non-alcohol beers is upon us.