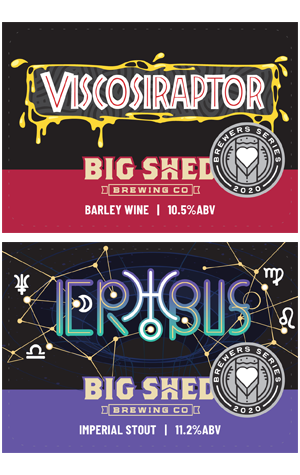 There's nothing like a little playful competition and that's exactly the relationship Big Shed and Little Bang share. For years now, these two breweries have been hosting playful Eastside vs Westside bouts across Adelaide. In winter 2020, the gang got together again to showcase two big styles: imperial stouts and barley wines.

The face-off – which they took online – is Big Shed’s first venture into barley wines, and they decided to take the recipe down the American route. The 10.6 percent ABV Viscosiraptor was born with a name fitting for an aggressive, bold beer. A heavy hit of speciality malts boosts the malt structure, with Gladfield’s Aurora to the fore; as for the hops, Cascade and Comet clawsat the sweetness to add balance and some extra bite.

The first impression is in your face: big, sticky and a little syrupy. Light brown in colour, the aroma is sweet taking the form of dried dates, sultanas, currants and a little caramel, toffee and even a touch of citrus. The sweetness works well with the syrupy nature of the barley wine, making for a slow sipper. Again, the aforementioned dried fruits come into play to taste, working together in harmony alongside a little bitter grapefruit and leaving a balanced bitterness, while the booze lingers, leaving the drinker feeling warm and safe.

The Big Shed team are no strangers to hearty, flavoursome stouts and their Russian imperial stout Erebus is no different. In Greek Mythology, Erebus is the god of deep darkness, a fitting name indeed. The lurking figure gains its colour through healthy additions of Eclipse, light chocolate, roasted barley and dark crystal malts, while the English Fuggles hops meets New World Sabro in the boil.

The pour from the can takes time, as the Erebus has a thick, visceral texture; jet black in appearance and topped off by a chocolate brown head, creamy espresso coffee aromas reign accompanied by sweet dark chocolate and a little roast. The roast is a little more prominent flavour wise; while initial impressions are of a sweet stout, espresso coffee comes in large with the bitter dark liquid chocolate and even some dried sultanas doing a little heavy lifting, with a decent bitterness adding balance and adding to the complexity.

Two separate dinner tastings and a virtual tasting launched the two new beers, knocking heads against Little Bang’s Galactopus and Sludgebeast. In the end, the winner took the form of several blends of all four, with some very interesting names being thrown around on the virtual feed.