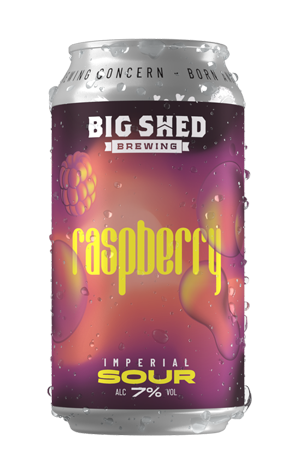 Taking advantage of the bigger shed and much bigger brewery they moved into in 2019, Big Shed continue to expand their range. Aside from their core range and a host of limited releases, the Big Shed team also pump out a Brewers Series and one under the Beer Club banner, and now they have an imperial sour series too. First up is a raspberry sour featuring 400kg of raspberries added to the ferment.

See through clear, and leeching a ruby pink hue from the fruit, Raspberry Imperial Sour is thick and full-bodied yet stops short of being cordial or syrup like. The raspberries are the showstopper, dominating throughout both in terms of fruity flavours and a decent tartness, contributing to a sourness that's strong but not too puckering in a beer that masks its alcohol content well and making the end result quite drinkable despite its potency.