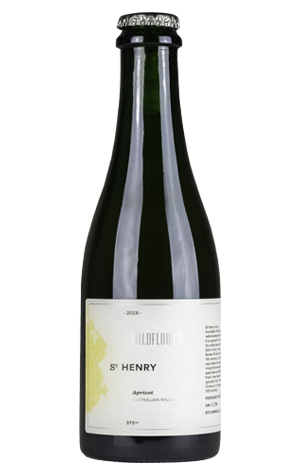 In 2017, Wildflower was widely lauded for many reasons, but one of the particular highlights was St Florence. Named in honour of the daughter of chief brewer/blender Topher, this was a spontaneously fermented ale featuring grapes, several rounds of blending and various bouts of ageing inside different vessels. Some six months – and one hard act to follow – later, the second saint in the series has arrived: St Henry is an Australian wild ale that’s been re-fermented with apricots and, in keeping with the theme, is named for the second child of co-founder Chris Allen.

If you finds parts of St Henry reminiscent of Wildflower’s Gold beer, there’s good reason: it contains two ten- and twelve-month-old barrel aged Gold blends. Back in January these were racked over more than 200 kilograms of apricots (somewhat amusingly sourced from an orchard in Orange) that had been patiently and painstakingly deseeded until just the flesh remained. Then, in March, they further blended that with an otherwise unreleased ten month old wort, affectionately nicknamed Mother, whose original purpose was simply to culture wild yeast and bacteria. As time wore on and the beer went through ten weeks of fermentation, then another ten of bottle conditioning, they must have been increasingly heartened to find that their toil at the bottom of apricot mountain was worth it as St Henry turned into a fine follow-up to Florence.

A striking aroma aside, perhaps the most immediately noticeable feature of the beer is that, for all the apricot character, it’s not sweet. There’s none of the saccharine syrup quality you might find if you were making this kind of beer on a budget or in a hurry, instead there’s this sensation of a real ripe apricot – like they’ve captured the essence of the fruit, as opposed to using an essence. All that’s lacking is the textural pleasure of the fibrous flesh. Nonetheless, the fruit character here integrates beautifully with the blended base beer, which throws out Gold’s customary but ever evolving mix of mild funk and tartness/acidity/dryness – feel free to take your pick of the refreshing qualities it leaves you with.

When it comes to giving their Gold beer a fruity touch, Wildflower seems to have already developed a knack of making every post a winner. Keep these saints marching in.

Launched at the blendery on May 12