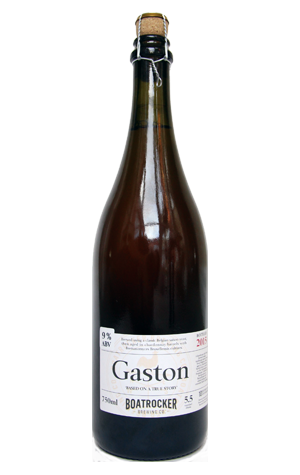 The last of the flurry of new beers released by Boatrocker around the opening of its Barrel Room is another barrel-aged beer. Like the Brambic we wrote about last week – and, we understand, all future bottled Belgian-inspired, barrel-aged beers from the brewery – it comes with a rather refined looking label, not to mention the cork and cage that's appeared on a number of their beers recently; packaging days must be lots of fun...

It's also, for now at least, only available direct from the Barrel Room in Braeside, with a two bottle per person limit due to the scarcity of the beer. It's a 9 percent ABV farmhouse ale – we're pretty sure the phrase "sour saison" was bandied about by someone at Boatrocker in a recent conversation – that's had Brettanomyces added while in French oak that formerly housed Chardonnay.

Once you've made it to Braeside, got past the cork and the beer's in your glass, what awaits? A hazy golden beer with fluffy white head that gives off some malt sweetness and apple aromas while delivering an acidic tartness on the palate, the result of which is a beer that's surprisingly cleansing for one so big.