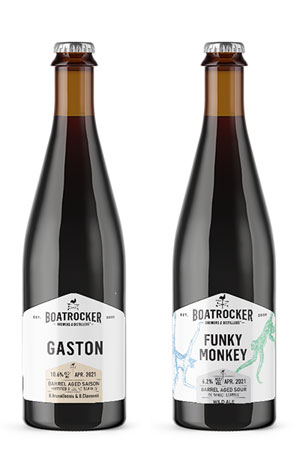 Hundreds of beers have left Boatrocker's brewery and Barrel Room over the years, and plenty of people have enjoyed plenty of them. One of my personal faves was Gaston, a chardonnay barrel-aged saison first released in 2015 and named after brewery founder Matt Houghton's French great uncle. He's back in 2021 after spending time in ex-fortified riesling barrels and featuring a blend of Brett Brux as well as Brett Clausenii. Matt says he's keen to see how the big beer – it's higher than 10 percent in alcohol content this time – comes across in five years, but it's still pretty approachable now. There are some softly sweet malts, subtle Brett funk, a little tropical fruitiness and surprisingly little heat if you tuck in today, rather than waiting to see what the Brett has to offer over time.

As for Funky Monkey, this barrel-fermented wild ale is yet another edition in the Ramjet saga. In this case, it's a sour that's spent time in former Starward whisky barrels that had housed the imperial stout. For me, the previous beer's impact is subtle, with the Monkey's funkier elements taking control: the aromas are akin to a Bretty Belgian golden ale, while there's a little honey sweetness alongside flavours of ripe pears and stone fruit, not to mention plenty of lively, sweetly acidic funk. As for the title, that comes from the Boatrocker founders' son Jake, who'd been eager to lend a hand with the naming process.