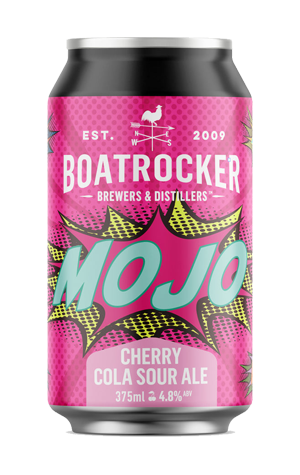 A third cola-inspired sour from a Victorian brewery to land at Crafty Towers in 2022 – when we're just six weeks in? Yes, sirree!

Admittedly, Mojo sits a few steps apart thanks to the brewer's aim to recreate cherry cola rather than the straight up version. The addition of cherries – 200kg per 2,000 litres of beer – conjure a sort of faded crimson colour and send lively, sweeter, cordial like cherry aromas your way alongside that familiar caramel-cola sweetness and a hint of the herbal.

Mojo is one of several colourfully-attired cans to leave the Braeside brewery over summer (we received samples of new batches of the now core range Conehead, Saison and Life Is Peachy with it) and is sweet on the one hand and cleansing more than sour on the other. It’s a combo that makes for a fun, warm weather refresher that’s not just a few steps removed from the other cola sours we've tasted recently, but also a few steps away from some of Boatrocker’s piercing barrel-aged blended sours. It's the sort of sour a purist might tell themselves they shouldn’t enjoy, at least until they’re handed one on a hot summer afternoon.