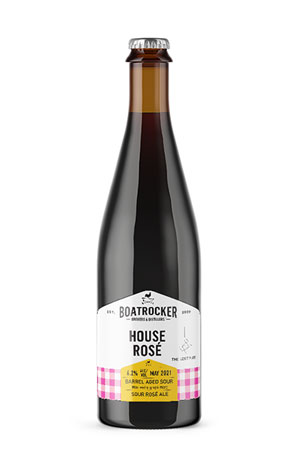 Boatrocker have been releasing their House Red and White seasonally for a few years now, the beers evolving via the Solera method which sees the brewers remove liquid from barrels each year for blending, then topping them up with fresh wort before letting the house culture go to work for another 12 months. For winter 2021, there's a third in the series too, as House Rosé makes its debut with spent mourvèdre grapes added to a wild ale base.

The third entry in the trilogy has Boatrocker’s typical golden sour haze accompanying the rosy hue, meaning it looks like an unfiltered young natural rosé and possesses a juiciness of fruit character to match. Indeed, the spent grapes come across in quite a jammy manner in a beer that's vinous more than bracingly sour.

The 2021 House Red is densely cloudy from its many years of oak habitation and blending, while it also has jam like qualities when it comes to its fruitier side, albeit a much richer berry jam. Add in the aged red malts, soft acidity and rounding oak and you've got a yummy Flanders red style ale.

As for the latest House White, it looks like a hazy IPA but you only have to get it within a couple of feet of your face before it disavows you of that. While probably the most vinous of the trio on the nose, it’s all about tropical fruit juice and sharply sweet acid on the palate, with a whiff of funk along for the ride too.