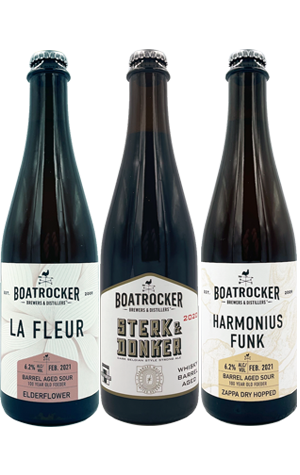 The advantages of opening Australia's first brewery barrel room (then adding a distillery) must be manifold, not least when you've got a few years under your belt to amass all manner of barrels and other oak vessels while developing various house cultures – wild and otherwise – as well as base liquids with which to create.

In the case of La Fleur and Harmonious Funk, Boatrocker make use of some of the wild ale that started out in their koelschip, aged for three years in a 100-year-old foeder they obtained from the Stonyfell Winery in the Adelaide Hills, and then taken in different directions. The former was rested on elderflowers, and I have to admit it's tough to pick up much of their character except maybe in the aftertaste given there's so much going on. It opens with hay / horse blanket alongside a sharp, acid-tinged sweetness and a soft pineapple / tropical fruit aroma more reminiscent of hops than esters. It's as bracing as a walk through London streets on a cold, rainy winter morning, equally sweet and sharp and quenching.

The latter features the twisted new hop variety Zappa and, aromatically, brings to mind a kveik-fermented hoppy beer: a stewed tropical mélange with a little sponge finger sweetness in the background. That doesn’t prepare you for the wild koelschip action underneath; it hits hard, cutting a swathe across the palate – all acid prickle and no half measures.

As for the 2020 Sterk & Donker, the Starward barrel-aged Belgian dark strong ale will be familiar to fans of the brewery. There's plenty of juicy whisky on the nose, while the overriding experience is as much fortified dark wine as it is Belgian ale, one awash with dark berries and Muscovada sugar. Compared to the sensory assault of the wild ales, it's like snuggling under a doona with not one but two hot water bottles for company.