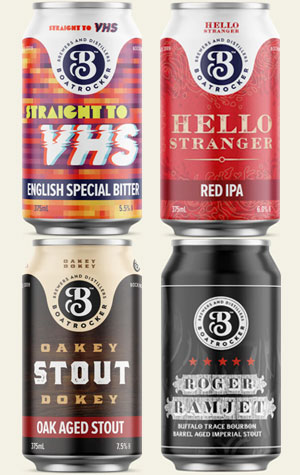 Such is the swiftness and intensity with which many brewers release new beers these days, it can pose challenges for those of us covering the industry. There's the need to look after one's liver and ensure you factor in a number of AFDs each week, and also the need to work out how best to present them in cases like this, when six new releases from one brewery turn up at once.

Thankfully, within this salvo from Boatrocker there's a quartet with a common theme: taking the drinker on something of a journey through malt, all while intensifying things on the booze front too. Your entry point is Straight To VHS, about as off-trend a beer as you could hope for: an English ESB in which the only real departure from tradition is the fact it's force-carbonated (but not very highly) in a can, rather than coming at you from a handpump. Pouring a deep copper / bronze, here the brewery's favoured Maris Otter, in combination with some specialty malts, come across as toffee-glazed nuts, with a touch of pale treacle to taste. The English hops contribute a faint, drying earthiness and there's a flicker of sultana-like fruitiness too in an offering that's rather more autumnal than its jazzy label.

Hello Stranger is another to add to the canon of red IPAs appearing (or reappearing) at this time of year. This one has a ruby-tinged chestnut hue and aromas of pine / cedar and dark berries rubbing up against toasted, dark brittle. The softness of the mouthfeel contrasts with a feisty bitterness, making for a combo that feels designed to satisfy a hophead craving something heartier through winter.

Now, we know very well that Boatrocker know stouts, from their trad-as-you-like Stout through to the many iterations of Ramjet (of which more later), and here they serve up something of a midway point between the two. Initially, at heart it seems that Oakey Dokey is in keeping with the former, but dig in and there’s a marshmallow like creaminess taking it one direction, and a roasty tang in another. That said, gently bitter dark chocolate remains the main attraction, as oaky vanilla swirls deep within.

Which leaves the big boss: 2022's version of Roger Ramjet. Should you not have made his acquaintance before, he's what happens when Ramjet meets bourbon barrels, in this case from Heaven Hill and Buffalo Trace. This vintage pours an impenetrable black with a Demerara sugar-coloured head and leaves you in no doubt where it's spent a few months. The barrels have made their mark and then some, roaring into your olfactory system with their sweetly spirituous charms before the underlying Ramjet has even left the starting blocks. Indeed, that revered liquid is left to act as the creamily viscous, choc-fudge core, as the bourbon wraps itself around it like a winter coat.