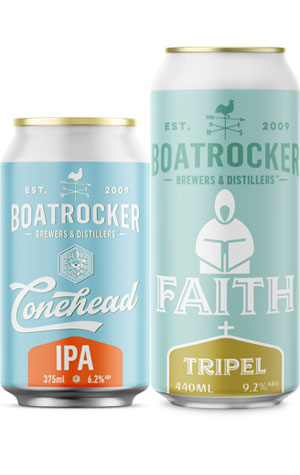 It's been commented on with some regularity in 2021, not least by the "Make Beer Clear Again" gang, that West Coast IPAs have been doing their bit to push back against the wave of haze enveloping the IPA world. And Boatrocker's Conehead, brewed a second time in quick succession for Christmas, sits very firmly in the MBCA wheelhouse. Clear as anything and dry as anything too, aromas are of the dank, piney, pithy, white wine-y kind, and while the pale malts initially feign at sweetness, they soon relent in the face of the beer's sizeable drying bitterness. In short: lean and bitter, like IPAs used to be.

Faith sees them return to brewery founder Matt Houghton's spirit land: Belgium. In a year in which Slow Lane's Threefold has flown the flag for the simple joys of tripels, here Boatrocker look to showcase one of that country's unique yeast strains. Faith might not look too dissimilar to Conehead in your glass – golden but visibly denser and boozier – instead of hop-derived characters, it's awash with spiced honey blossom malts, a white pepper perfume, hay like hops and sweet booze, rounded off by a quenching dryness that belies everything that’s come before.

The brewery's festive feasts-in-a-can, Fat Santa and Banshee barleywine, are also back for Christmas, but I've not squeezed them into the sampling schedule yet. Watch this space...