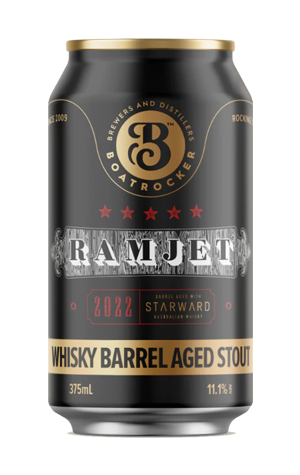 You know you've been around the beer world a while when you realise the Ramjet in your glass is the tenth version that's come your way – and that's not including the Roger Ramjets, the Coffee Ramjets, the Dramjets (still and sparkling), the Jackjet, and on and on. So, nine years on from the beer's mind-blowing debut, where does Boatrocker's flagship sit in 2022?

Well, for starters, you don't mess around with an icon, so once again the double digit base beer spent six months in barrels from Starward Whisky that previously housed red wine. But even without messing with the process, you can end up with slightly different results and at this early stage in its life the 2022 Ramjet isn't as overtly sweet as some of its predecessors. For me, there's a little more dark liquorice swirling through the dark choc fudge, possibly the ongoing influence of the red wine, while the whisky – sometimes providing a wantonly juicy top note – is more integrated too.

Indeed, the 2022 vintage leans further into the drier, leathery, earthy, tobacco-y realms of the imperial stout world than any Ramjet I can recall. Everything's relative, of course – this is no gnarly Marlboro Man of an imperial stout, just Ramjet with a layer of stubble.