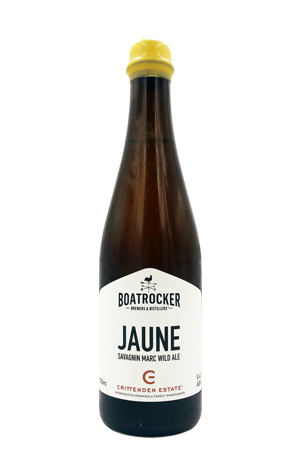 God knows how many thousands of different beers have crossed my palate since the idea for a beer website first popped into my noggin, yet still there's plenty to learn. Case in point: I'm not sure I remember ever having a wine featuring savagnin grapes (not to be confused with sauvignon blanc). To be fair, I still haven't, but I am at least aware of such things now; also that Crittenden Estate on the Mornington Peninsula is one of the largest growers of the variety in Australia.

Given they're relatively near neighbours – and Boatrocker's penchant for experimenting with fruit in their wild ales – their grapes have made their way into Jaune, which takes its name from one of the wine varieties native to Jura, the French region from which savagnin grapes originate. And we may as well get one thing out the way first: such is the Bretty, funky, barnyardy character of the beer, there's an element you might describe as manure in the mix.

Now, the brewer I shared my bottle with was quick to point out it's "sweet, fresh manure" – the good kind, obviously. And it's probably worth pointing out I'd spent the previous weekend bush camping with said brewer, during which a fair bit of conversation revolved around how farmers decided what price per kilo was appropriate for the different varieties of poo / manure you'd see for sale on the side of the country lanes. But, still, manure is one characteristic of Jaune.

We weren't sure there was much of an overtly fruity nature either, but it seems the grapes can often deliver a savoury quality, so that makes sense. What there is, however, is a sweet acidic grip, a creaminess within the aroma, a malt character reminiscent of nougat, and real depth and texture throughout. There's also a sting in the tail; it wasn't until I spoke to Boatrocker main man Matt Houghton about the beer and he mentioned the grapes contributing an "enormous – almost too much" amount of extra booze, taking it to 9.4 percent ABV. I'd have sworn it was in the 6.5 range.

tl;dr – the sort of complex, funky sour you might find at a Belgian farmhouse brewery as opposed to the quick, easy-going, fruit forward contemporary sours that often aren't actually sour at all.