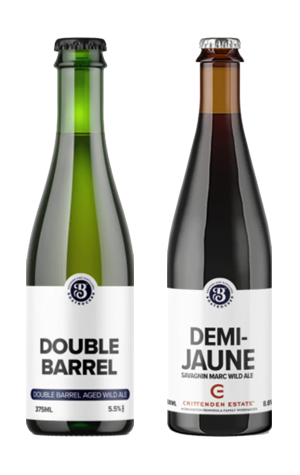 Boatrocker may have unveiled a new look earlier in 2022, but on the beer front the mission continues on a familiar path: a steady stream of "normal" (everything is relative with Boatrocker) beers in colourfully-attired cans encompassing IPAs, malt-driven ales, fruity sours, stouts and the like on one hand; and barrel-aged, blended and rather funkier beers on the other, which appear in rather more austere bottles.

After tucking into a few of the former last week, it's into the latter now, with Double Barrel a blend of a wild barrel-aged saison and wild barrel-aged Berliner weisse given an additional four months in old Starward barrels. It pours a deep golden that for some reason reminds me of a Scottish lager when that couldn’t be much further from what we have here. Look a little closer and the slow pace with which the bubbles wade through the aged liquid are the early signifier of that, even before you swirl and sniff and are met by juicy sweet whisky and heaps of oak that seems to offer a calming influence to ensure the acidity hits quenching without moving into anything more aggressive. There's a little marzipan / almond like character in there too in a beer that's fulsome in texture and, by the end, has me thinking less of Tennent's than a bolshier take on their all-time great Sternweisse.

With Demi-Jaune, they've collaborated with Crittenden Estate winemaker Matt Campbell, using savagnin marc grapes to create what they're tagging a "wild Italian grape ale". Following Jaune in March 2021 comes Demi-Jaune, a little lower in alcohol but no less intriguing. From the off, the aroma rising from this dense-looking, slightly hazy pale gold liquid takes you aback – and I thought I’d come across pretty much everything in beer. It flits between fortified white wine, elderflower butter, and marigolds on the nose, while there's a seriously mouth-watering sourness underpinning the vinous, citrusy, oaky, juicy, tangy, puckering-as-anything experience on your palate.

Demi by name, maybe. The whole shebang by nature.