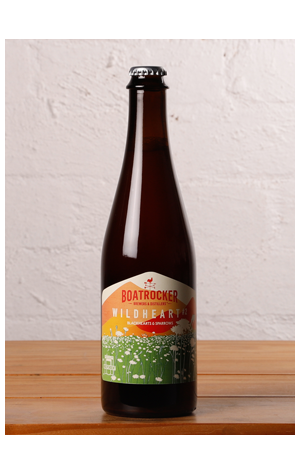 The beer lovers at Blackhearts & Sparrows do seem to have a few favourites when it comes to collaborating, with this collab featuring Boatrocker the second such venture with the Braeside producer. Around ten of the bottleshop staff headed to the brewery's Barrel Room to help bring the beer together, sampling a variety of different aged liquids from barrels before deciding on their chosen blend. And it seems the number of different voices has brought them to a point of some balance within the wide spectrum of wild, mixed ferment, barrel-aged and blended beers.

Some of Boatrocker's barrels contain some fiercely intense acidity but, while you can sense elements of that here, it’s a feature rather than the feature. The blend of two barrels of lambic-esque ale aged two and six years, a barrel of two-year-old Brett blond ale, and a barrel of two-year-old dry-hopped sour ale sees Wildheart #2 end up part farmhouse cider, part fermented stone fruit, part barnyard pong, all delivered in a pretty rounded whole.

And all other Blackhearts stores