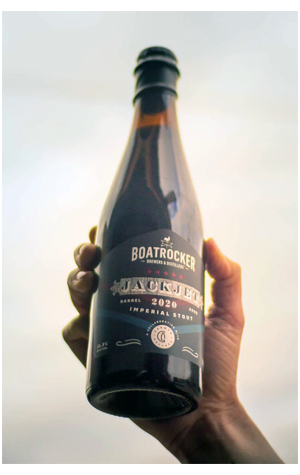 I'm not sure whether this is more cruel than kind. After all, when the only two businesses selling this beer – collaborators Boatrocker and Carwyn Cellars – put their allocation of bottles up for pre-sale online they both sold out within minutes. So, as far as I'm aware, now I've consumed mine there's a grand total of something like two dozen awaiting the first people through the doors at the two venues this Friday.

But part of our mission is to tell readers about new releases and when they're as special as this one it would be remiss to leave it out. It's special for a few reasons: it's a version of Boatrocker's iconic Ramjet; it's been aged for more than a year in barrels once used for Jack Daniel's 150th Anniversary Limited Edition release; and, as made clear above, there's bugger all of it.

Even when still relatively fresh from the fridge, the cooler temperature has little hope of applying a straitjacket; both the distinctive JD character and the underlying Ramjet's luscious waves of chocolate fudge assault the senses. Further waves carrying heaps of vanilla, sweet spice, molasses, a touch of leather, expertly extracted espresso follow, with a touch of nut-tinged liqueur making an appearance as the beer warms.

At a time when there's many tasty imperial stouts and barrel-aged beers being produced across Australia, and when there are many fine Ramjet variations as forebears, JackJet still slots into the upper echelons. Gorgeously gloopy, liberally lascivious, generously giving and sadly scarce.