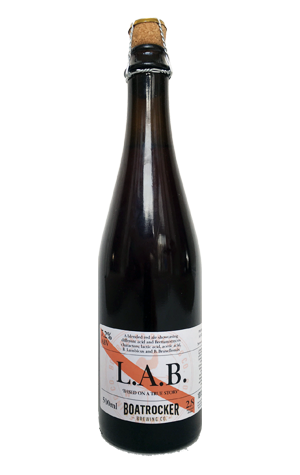 Even before he started brewing in Braeside, Matt Houghton had started amassing barrels. The intention was to develop the largest and most diverse barrel-ageing program in Australia, predominantly to create Belgian inspired ales. Thus, while the Starward barrel-aged Ramjet imperial stout has garnered most attention from beer lovers, it's the barrels containing all manner of strains of bacteria and Brettanomyces that are his real passion as he looks to create lambic style ales, funky saisons, Oud Bruins and Flanders style red ales.

At various stages over the past three years, "young" versions of the last of these have made fleeting appearances; there was a single keg for a Good Beer Week event at Merricote in 2014 and a version racked over berries that appeared briefly in March, winning the People's Choice vote at the Good Beer Week Gala Showcase. Now, with L.A.B. – the acronym representing lactic (acid), acetic (acid) and Brettanomyces (yeast) – he's happy enough to release one in bottles.

L.A.B. is a blend of barrel-aged beers that are between 12 and 24 months old and weighs in at 7.2 percent ABV. It pours a hazy, ruddy red and displays the broad range of characteristics for which the style, of which Rodenbach is the most famous producer, is known. The acetic acid lends the aroma a balsamic character alongside the creamy toffee sweetness; there are cherries and dark berries, vinous qualities and even a hint of vanilla, all tied up by a cleansing acidic sourness.

Matt has said his aim at Boatrocker is to "take on wine" and it's beers such as this that will be leading his charge.

Some distribution into Brisbane via Calibre