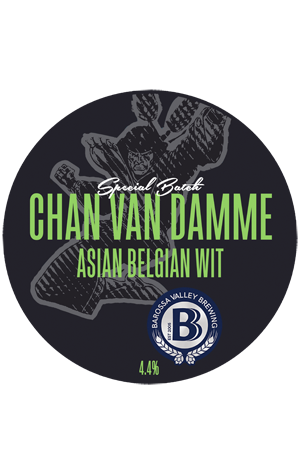 This beer was born from the merging of two very different cultures: Belgian and Vietnamese. Made in collaboration with the brewery's local Vietnamese restaurant, Ferment Asian, the idea was to make a beer for the restaurant's taps that uses its garden’s fresh ingredients. Lemongrass was used to create the aroma while Sichuan pepper was added instead of the standard coriander. As for the name, that came from another melding together of sorts: famous martial artists and actors Jackie Chan and Jean-Claude Van Damme.

The end result is a very pale and slightly hazy Belgian style witbier. Lemongrass aromatics leap out of the glass like the beer's namesakes when faced with an onscreen foe, mixing well with subtle yeast characters. The first sip is a sprightly, thanks to the level of carbonation, with the lemongrass continuing to come on strong and hints of orange present but not overpowering in a quirky yet light and easy to drink beer.