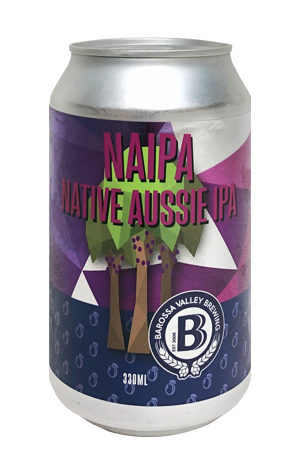 Barossa Valley Brewing feels like a brewery that flies under the radar somewhat when it comes to those nudging the envelope. Go back over the years and you'll find honey beer, beer-wine hybrids, fruit beers and more besides. Even their core range Aussie Pale Ale comes with a dose of lemon myrtle.

Here, they're playing around again, admittedly a little tongue-in-cheek, as they look to create a new spin on one of the styles du jour: turning NEIPA into NAIPA – Native Aussie IPA – thanks to the addition of native Davidson plums, which the brewers tell us contain more than one hundred times the amount of vitamin C found in oranges; it seems last year's GABS release Vitamin Beer has sent them on something of a health kick.

The plums are evident in the pour, lending the beer a pinky, peachy hue, while the broad, fruity aromas from the hops come berry-tinged. There's a creaminess on the nose too that has one thinking there could be lactose at play, but apparently not – must just be on the mind after publishing this feature. The tartness of the plums mingles with what bitterness there is to create a fair old pucker that rivals the experience of sucking the juice from a freshly sliced grapefruit, while contributing to the NAIPA's dry finish too.