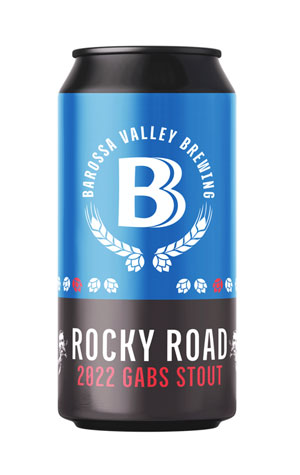 Barossa Valley Brewing have caught the eye with many great beers released over the years, across multiple styles, but when it comes to GABS beers they tend to stick to the sweet stouts. And in 2022 it's no different as they punch out a Rocky Road-inspired imperial. Added to the boozy base stout are toasted coconut, vanilla, raspberry and peanut butter, which combine to produce a decadent beer. With Barossa Valley Brewing saying it's been a rocky road over the past few years and now is the time sit back and enjoy a beer with mates, why not brew a Rocky Road?

The aforementioned adjuncts come through quite prominently in all facets of the beer: the raspberry and chocolate lead the way in the aroma, with the peanut butter and vanilla chiming in as well; the toasted coconut is there but only just. Take a swig and you'll enjoy a thick, silky mouthfeel courtesy of this 9.1 percenter that's super sweet, just as a dessert stout should be. The raspberries aren’t quite as prominent flavour wise, instead melding with sweet chocolate, vanilla and a little peanut butter.

The result is a beer perfect for a one-of-a-kind beer festival or just for enjoying as an after-dinner dessert delight.