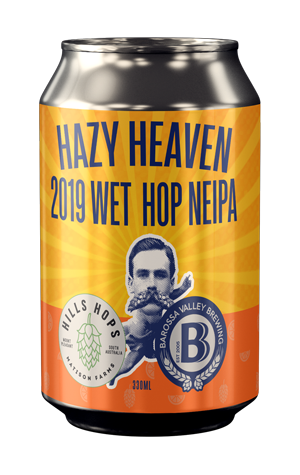 For the past couple of years, come harvest time, the Barossa Valley Brewing team has ventured to the Hills Hop farm to pick hops fresh from the bine. This time around, they got their families involved and managed to get their hands on close to 60kgs of mainly Cascade flowers. These were rushed back to Tanunda where the brewers had already begun work on the 2019 Wet Hop NEIPA.

Less than an hour after being picked, the hops were added to the beer, ready to allowing resinous oils work their magic.

Now canned and ready for consumption, the beer pours with a solid haze, stopping short of murky, and with a light orange colour and fresh hop aromas dominated by an orange and tangerine juiciness. Inhale again and there's a touch of resin, mango and earthiness in there too, while first sip delivers a fresh hop punch, practically numbing the tongue with one hop assault after another. Again, orange flavours are prominent (they chose the colour of the cans wisely, it would seem), creating juicy flavours that last to the final drop.