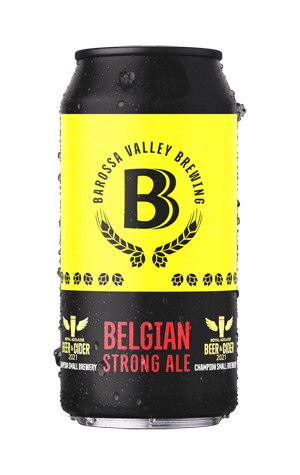 When it came to marking his 50th birthday with a beer, Barossa Valley Brewing founder Denham D'Silva decided to head back to the early years of his beer journey: back to those he enjoyed while living in Brussels as an 18-year-old. The style he landed upon is one any visitor to the Belgian capital simply has to enjoy at least once from a goblet at one of the city's cafés: a golden strong ale.

As with many classics from the old world, they're beers that on paper look simple enough: good malt, hops that are there as much for balance as anything too showy, and a distinctive yeast strain. Yet from such simple ingredients much can be elicited, in the main due to the yeast.

Here, sweeter, honeyed malts in conjunction with the 8.5 percent ABV lend the beer a waxen texture, while any impact from the hops is of a drying, slightly spicy nature. Pretty much everything else at play – the Amaretto / marzipan aromas, the soft spices reminiscent of a baked treat, the potent phenolics, and the dry finish doing its best to fight through the stickiness – is thanks to the yeast strain, caressed lovingly over centuries by Belgian brewers and, no doubt, caressed lovingly down the hatch by Denham as he marks his half century.