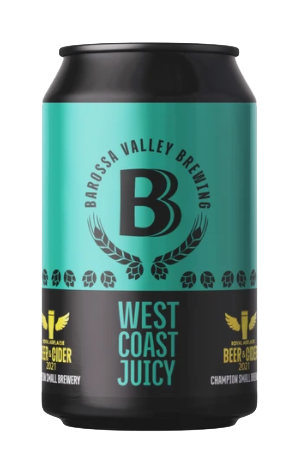 After a few years in which IPAs with their genesis in the breweries of the eastern states of the US gobbled up much of the ground previously occupied by West Coast IPAs, there's been a fightback by the brighter, leaner, more bitter old-timers. At the same time, there are plenty of brewers who've shrugged their shoulders and wondered: "Why not both?" It's turned out some rather delightful results too: vibrantly aromatic, juicy hop forward beers with an underbelly of drying bitterness.

With a name like West Coast Juicy, one can safely assume it's that sort of territory the Barossa Valley brewers have in their sights here. If I had to make a judgement call, it's that the juicy has the greater sway, with the hazy IPA serving up sweet citrus muffin aromas and a soft, almost fluffy texture that sits like a doona over the underlying fruity bitterness. Pineapple joins the citrus to taste amid a veritable mouthful of juicy hops, with a West Coast-esque bitterness the finishing move in what’s otherwise a sweet, copper-coloured hazy.