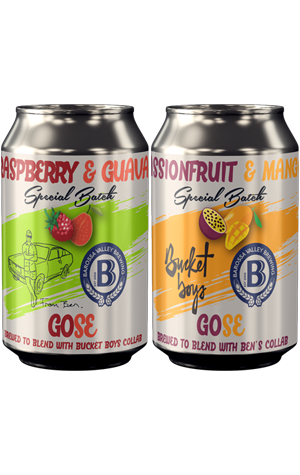 This collaboration between Barossa Valley Brewing, Beer From Ben and Bucket Boys started with love. When Benjamin Miller was visiting the Barossa Valley to propose to his partner, he stopped in to the brewery for a beer and struck up a conversation with owner Denham D'Silva. It continued over the next few weeks via email and phone, before the pair decided a collaboration needed to happen. So Ben brought in his brewing buddy, Jay Cook from Bucket Boys, and suddenly there were three in the bed...

The beer they made comes in threes also. Well, kind of. The two beers – the raspberry and guava version contains 150kg of each fruit in puree form; there's 200kg of mango and 100kg of passionfruit in the other – can be sampled separately or mixed together as a cocktail of sorts.

The raspberry and guava version sits bright pink in the glass, with the berries leading the way and the zing from the beer's sour side creating a sharp tartness alongside its fruity vibes before a touch of saltiness appears right at the end.

In the other beer, the mango is vibrant and juicy, bursting out of the glass, supported by a little passionfruit, a smidgen of earthiness and a little funk. The sourness takes a backwards step, with a creamy sweetness joining the fruit – and that hint of salt – on the palate.

The cocktail blend is an interesting one. A 50/50 blend creates a very light pink coloured beer in which the sweetness from some of the fruit additions mixes with the tartness of some of the others and a little creaminess from the use of wheat and oats. It makes for a fruity and zingy concoction that leaves the drinker curious as to what different combinations may offer.