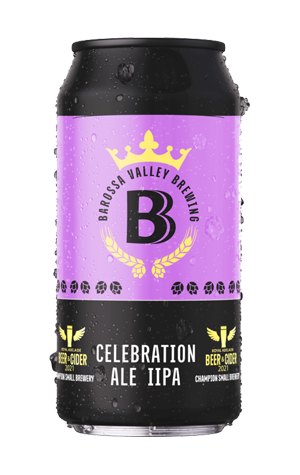 Barossa Valley Brewing have experienced repeated success at the Adelaide Beer & Cider Awards in the past and in 2021 took things to the next level. Their run of awards began in 2014 when their Canis Majoris IIPA claimed Champion IPA and Best In Show, before being retired years later. When they took out Champion Small Brewery at the 2021 awards, their brewers were asked which beer they'd like to bring back and the IIPA was a clear favourite.

The reboot tagged Celebration Ale isn't lifted straight from the recipe book, however, with Simcoe and Ekuanot Cryo hops brought in to add some extra oomph. And what a celebration the new IIPA is, getting the party started from the first sip.

The sticky, chewy malts lay down a toffee, bready base on which the hops marry nicely, contributing orange and some peachy stone fruit. The little malt sweetness that's present early on drys out slightly, aided by the balancing bitterness. As a result, no one element dominates, with all dancing together across your palate, presumably celebrating their return from the Barossa Valley Brewing vault.