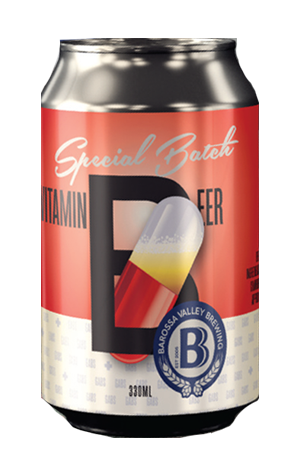 When it comes to each year's GABS, it seems most brewers creating a festival beer take one of a few approaches: start with a style du jour and do something extreme or unusual with it; find the least likely ingredient they can and put it in a beer (belly button fluff, whale vomit, snails and so on); or create a sweet, sweet dessert beer in the hope of winning over drinkers in the space of 85ml. Here, however, Barossa Valley Brewing seems to have set out to design a beer to help balance out the sugary calorific effects of the last of these or the impact of sampling what are often high alcohol beers.

Vitamin Beer features four super foods: cranberries, goji and açaí berries and spirulina, all added to a 7 percent ABV base beer. According to the packaging, this beer will increase libido, muscle, endurance, immunity and even help weight loss while reducing the effects of ageing. While no scientific testing has been done on such claims, we can confirm the additions create an appealing rusty red hue, the kind that could fire childhood nostalgia for the medicine given to cure coughs; thankfully, it tastes rather better.

Equally, you could argue it looks like a healthy breakfast juice loaded with the contents of a café's organic kitchen garden. It smells rather like one too, in fact, right down to the drying, tannic bitterness. The berries dominate the aroma, backed by some vegetal characters, sweet, sticky malts and a slight acidity. It's quite the combination, a shot of which could make for a great beer week morning tonic.