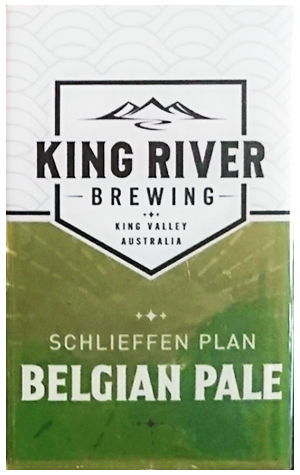 Brewer's notes: Chief of Staff Alfred von Schlieffen devised the Schlieffen Plan in 1905 as the only way a sandwiched Germany could survive the impending war. The idea was to rush through Belgian's "Chocolate Soldiers" and knock out France within 48 hours.

Much like the Schlieffen Plan, this Belgian Pale uses all German malts which provide a sweet backbone and pleasant taste to the beer bu,t as the malts advance, they are blocked by the Belgian yeast from Westmalle, which takes over the palate with pear and citrus fruits, complimented with some allies in Ella and Vic Secret, dry hopped to add tropical fruit to the beer.

A relatively simple but incredibly flavoursome beer it bridges the divide between a standard Blonde Ale and a Belgian Blonde Ale. You'll find it at the brewery's Tap Room, Moyhu Hotel and the Notting Hill Hotel.