Just like the wider High Country region it calls home, King Valley is a beautiful place to visit. And, just like its neighbouring valleys, it has much to offer visitors, whether their intention is to explore nature, enjoy outdoor pursuits or indulge their senses with fine local produce.

Unlike some of its peers, however, it's a little trickier to get to. You're unlikely to pass through for a day or two as part of a round trip up through the High Country; instead you have to deliberately choose to spend time there. Now, however, if you're a fan of locally brewed, seasonal beers, there's a good reason to do just that.

King River Brewing opened its doors quietly at the very tail end of 2016, hosting its official opening party – one that drew huge crowds – some months later. In doing so, it added yet another destination for beer lovers in Victoria's North East, a region already well enough served to have its own High Country Brewery Trail supported by the local council.

It's the baby of Nathan and Brianna Munt, built on the latter's parents' farm in the heart of the valley, around 40 minutes drive south of Wangaratta. Go back far enough and the property was part of the region's tobacco industry – the bar is housed inside the old kiln – while more recently it was home to a local icon: Brianna's late mother Barb Sartori ran King Valley Cucina, a hugely popular wood-fired pizza restaurant on the farm, and was known locally as one of the Three Nonnas alongside fellow King Valley cooks Josie Politini and Katrina Pizzini.

Today you’ll find the brewery inhabiting part of the building alongside the old kiln, right next to where visitors sit to sample Nathan's growing and ever-changing lineup of true-to-style beers in a Mediterranean influenced outdoor area surrounded by lush gardens in which broad old trees provide enough shade to create a natural playground for kids, even in the heat of summer.

While setting up the brewery, the couple kept their day jobs in Melbourne, travelling north to brew, package and serve customers every weekend, something they'll keep doing until the time comes when the move to King Valley becomes permanent. And, while their time at the brewery might be limited, they've wasted little of it gaining a following. The pub in nearby Moyhu has a loyal fan base for Nathan’s American IPA (a beer he didn't plan to brew more than once), the Mountain View in Whitfield pours his Kolsch and Smooth Altiber while up in Porepunkah the locals are digging his German inspired Altbier too – with good reason.

When you visit the brewery, chances are you'll find a number of farmhouse style or Belgian inspired beers on the taps; like many brewers, he's a huge fan of saisons – one day, hopefully, more Aussie drinkers will wake up to the style's allure too. You may well find beers making full use of the abundant natural resources on offer as well; when The Crafty Pint first visited we were invited to help pick figs from trees at the end of the driveway that were destined for a robust porter.

While brewing is giving the farm yet another story to tell, Nathan and Brianna are keeping the previous chapters alive. On the wall of the kiln facing the bar, you'll find the logos of the region’s old tobacco growers printed on hessian. And, at the far end of the bar, are two pizza ovens built by Brianna's dad Walter. Nathan reckons Walter's pizzas are second only to those at 400 Gradi in Brunswick, a sentiment echoed by many King Valley locals. As that restaurant won best pizza in the world in 2014, it's setting the bar high for his son-in-law's beers.

The High Country Brewery Trail has expanded to stretch hundreds of kilometres and include seven breweries. Over the course of a three day weekend, Kerry McBride stopped in at each and every one.

In part two of our guide to the High Country breweries, we start off in Myrtleford before taking the long, winding and beer-soaked road back to Melbourne. Join us! Barring the odd concession to modernity, such as his IPA, Nathan Munt prefers to take inspiration from the old European ways. Arguably the highlight of King River Brewing's short life to date was a gold for his most personal beer, the Waiting For Godot Belgian Tripel, at the 2019 Indies. So you can imagine he puts more weight than most on the time of the year that Oktoberfests rule the land; in King River's case, they even call it Muntoberfest. Two of the beers appearing at the 2019 running of the… Read more
Rich Brown 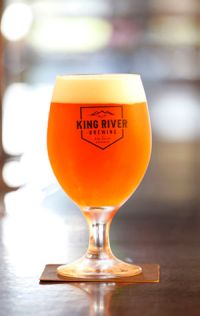 King River brewer Nathan Munt only intended to brew his IPA as a one-off. Then one of the local pubs put it on tap, discovered plenty of locals taking a liking to it and people power won out. Thus there's a good chance you'll find it pouring at the brewery whenever you visit. Nathan has said it's not that IPA an IPA; in other words, it's not a beer that's going to take a bat to your palate and beat it into submission with bitterness and it weighs in at less than 6 percent ABV too. But it's in good… Read more
Golden 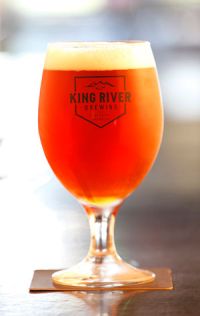 The German altbier style isn't one you see a lot of in Australia. Yet, when The Crafty Pint first called through King River's brewery, it was the beer we were keen to go back to once the tasting paddle was drained. It turns out it's proving rather popular with the High Country pubs stocking King River beers too. It's a traditionally minded take on the style, pouring a deep brown and mixing nutty aromas with those of caramel and following up with layers of malt driven flavour that's wrapped up by… Read more
Rich Brown 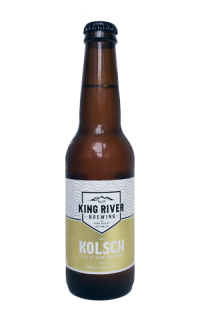 While it didn't take long for King River Brewing to find local admirers of beers such as his IPA and Altbier, it pays to have an entry level beer when you're operating a brewpub, particularly when you're located in the country. That's the role played by this Kolsch, a role that's earned it the subtitle "The Elbow Bender" given that's what it'll have session drinkers doing. It's a simple beer: some light honey malt sweetness and the sort of dry finish that will offer more mainstream drinkers… Read more
Pale Yellow Many brewers have a love for classic beer styles and barrel-ageing but I’m not sure I’ve ever seen one quite as happy as Nathan Munt filling barrels with a tripel. Some fortunate timing meant I made it to King River Brewing just as he was pouring his 100th brew into barrels obtained from neighbouring winery Darling Estate. Nathan had spent some time trying to get his hand on those barrels too, with John Darling finally relenting and offering them as a birthday gift. Formerly, they housed the… Read more
Golden Not one to do things by halves, King River’s Nathan Munt was planning on taking three different fresh hop beers to High Country Hops this year. And, while the festival couldn’t run this year, those three beers have still been brewed as a celebration of Australian hops and can be snapped up in a Harvest Mixed Pack the brewery is selling, which also contains the wonderful Fig Porter. Each amber-hued beer is 6 percent ABV and dubbed a Wet Hopped Ale, with strong ale probably the closest in terms… Read more
Rich Brown Nathan Munt from King River Brewing has been busy throwing fruit into his beers recently, with two Berliner Weisse style beers available from the brewery this April. For Blueberry Berliner Weisse, he sourced local blueberries so he could throw them atop a kettle soured wheat ale base. The skin of those berries give the beer a fantastic pink, slightly purple hue while the flavour they contribute is unmistakable, while the tart finish, to my mind, brought to mind chomping on blueberries straight from… Read more
Red

If you buy them from King River's new online store use the code CRAFTYPINTS for a 10 percent discount! 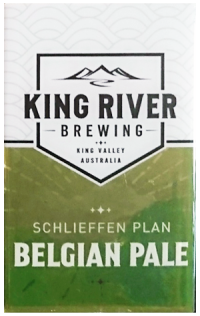 Brewer's notes: Chief of Staff Alfred von Schlieffen devised the Schlieffen Plan in 1905 as the only way a sandwiched Germany could survive the impending war. The idea was to rush through Belgian's "Chocolate Soldiers" and knock out France within 48 hours. Much like the Schlieffen Plan, this Belgian Pale uses all German malts which provide a sweet backbone and pleasant taste to the beer bu,t as the malts advance, they are blocked by the Belgian yeast from Westmalle, which takes over the… Read more
Golden Yellow Earlier in 2017, when The Crafty Pint swung by King River Brewing to check out the fledgling brewery, co-owner and brewer Nathan Munt took us for a wander along the driveway leading to the family farm to pick some figs from his father-in-law Wally's little copse. Delicious, soft and juicy they were too, with those that didn't end up in Crafty Pot Jr's mouth or Wally's vanilla fig jam set aside for a beer. And that beer is this robust porter. Nathan says it's: "A traditional English porter with… Read more
Dark Brown 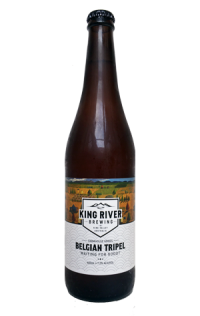 Waiting for Godot is a play by Samuel Beckett so elemental it has been interpreted in myriad ways over the decades. For King River Brewing founder Nathan Munt, he sees in the play a message that you can spend your entire life waiting for something to happen to you – and whatever it is you're waiting for may never happen. His answer: get up off your arse and take control of your destiny. It was while enjoying one of his homebrewed tripels that he decided to do just that – make the moves to take… Read more
Golden When you're based in the Victorian High Country, one of the two biggest hop growing regions in Australia, you wouldn't want to let a hop harvest pass without taking advantage. In his first season as a local brewer, Nathan Munt did just that, getting his hands on 20kg of wet Ella, Galaxy and (his favourite) Vic Secret hops, all of which were added to the hopback to create this Wet Hopped IPA. There can be a danger with such beers of capturing little more than the grassy or vegetal qualities of the… Read more
Golden