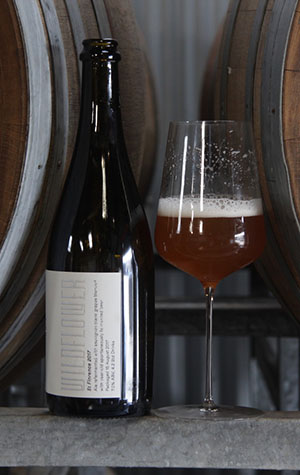 Wildflower has a way of making every beer feel a bit special, but its newest release is particularly so. Called St Florence, it’s been made in celebration of the recent birth of head brewer Topher’s daughter and the beer appears to have had a gestation as complex as the miracle occurring in the womb.

At the beginning of the year it started life spontaneously, from fruit grown down south in Gerringong and Sauvignon Blanc grapes from out west in Orange. After spending a week macerating, a barrel of one year old spontaneously fermented beer was racked on top of the fruit, into an oak puncheon, and left to ferment for a second time. A further ten weeks went by while it finished its ferment, the various yeasts on the skins of the fruit plus whatever was left in the year-old beer gobbling up all the goodies before it was moved back into barrel for another four months of ageing. Then, before it was packaged, it was blended and balanced out with another one year old ale, plus some four month old Wildflower Gold blend to give it a bit of freshness. The mind does wonder what’s in store for Florence’s first birthday...

St Florence gets its official release at Wildflower from 2pm on Saturday October 14 with a limited number of bottles available (and that includes online sales, which open at 9am), plus a single keg that’ll be pouring at the cellar door.