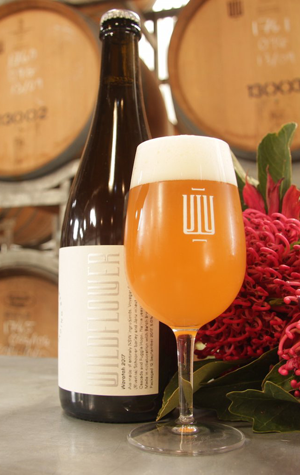 Somewhere deep down you get the feeling it’s all been building to this. In recent years, as craft beer has spread outward to seek new audiences, many brewers have looked inward towards local production as a point of pride and distinction. That’s most frequently manifested in a brewery supplying exclusively, or predominantly, to its local area, but the concept runs right through the chain to the sourcing of ingredients.

You’ll hear many breweries proudly, and quite rightfully, preaching of their use and support for Australian grown malt and hops, a reflection, perhaps, of the importance placed on those two ingredients by brewers and drinkers. Water, crucial as it is, is not something sexy with which to sell a beer. Yeast comes not from nature, but from a lab in a packet or vial, with a tendency to be valued for its efficiency rather than personality. So, while many beers can claim to use mostly Australian ingredients, it’s still rare to find commercial beers made entirely of Australian ingredients. It is rarer still to find one sourced entirely from a single state.

Waratah is a truly collaborative beer that represents New South Wales. Schooner barley and Janz raw wheat were grown by Voyager in Whitton, Cascade and Fuggles hops were grown by Ryefield Hops in Bemboka and it all came together to be made at the Batch Brewing Company in Marrickville. After it was brewed, back in July, it was transferred to Wildflower Brewing and Blending, who had foraged and cultivated native, wild yeasts. That was added before the beer was left to undergo primary fermentation in a tank then transferred to a wooden puncheon for secondary fermentation. Twelve weeks later it was dry hopped, left for a further week and packaged in time for all the collaborators to come together during Sydney Beer Week to celebrate the beer’s release, share the story of their respective of businesses and revel in a burgeoning local industry.

Some may argue it’s unnecessary or overly parochial to constrain oneself to ingredients defined by the arbitrary boundaries of a map. All that should matter, they will say, is the quality of the ingredient, whether it’s a smoked malt from Bamberg, a hop cultivated in Japan or the ideal brewing yeast conjured up in a lab in San Diego. But, as the reach of the giants of the global beer world stretches out and begins to grasp more tightly, looking locally for collaboration and innovation is something to strive towards, if only to prove it can be done. Waratah shows it can.