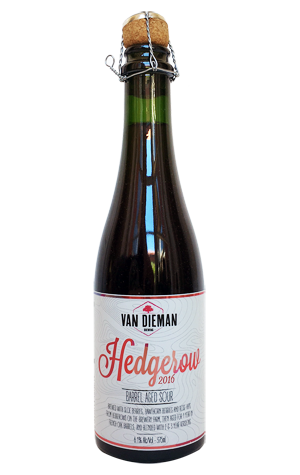 Van Dieman's Hedgerow ale has been around almost as long as the brewery itself and is probably the best way to plot the evolution of the farm-based operation south of Launceston. When it first appeared, it was a beer inspired by the English real ales Will Tatchell had brewed in the UK before returning home, albeit with some unique additions: sloe berries, hawthorn berries and rose hips gathered from the farm. In subsequent years, it was aged in barrels, collecting an Australian International Beer Awards gold medal along the way, and now it has reached, we suspect, the form in which it will remain.

The 2016 release is a blend of different barrel aged vintages of the beer, between one- and three-years-old, which Will has tagged a Flanders red style ale. And it joins a fine line of such beers to appear from local brewers in the past couple of years, including Holgate, Boatrocker, Green Beacon and 3 Ravens. You'll pick up some jam like forest berry fruits, acidic aromas reminiscent of Rodenbach plus oak and tannic characteristics too. It's light enough body wise to be classed as sessionable although, given there's only 1,500 bottles in existence, it's probably best to sip and savour. When you do, you'll find a lingering, tannic red wine dryness and berry/cherry sweetness alongside the rich malts and underlying tartness, the result of which isn't too far removed from enjoying a cellared, oaked, cool climate fruity pinot noir.