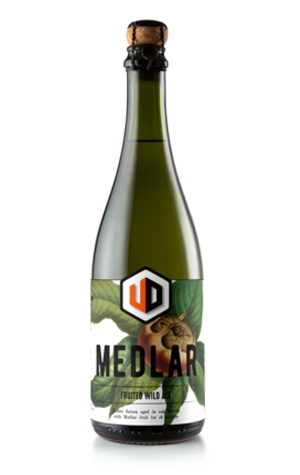 One of the many marvellous things about wild ales is the element of the unknown, the unpredictable, they can possess. Sure, for brewers it might mean a lot of liquid disappearing down the drain after months or years of patience, while for drinkers they may encounter an experience that's not always for them. But it can also lead to moments like my first meeting with Van Dieman's Medlar, the latest wild ale to leave the Tasmanian farm brewery.

In quick succession, my thought processes (and hastily jotted tasting notes) went thus: "Aftershave and forests. Really distinct aroma – not funky or earthy, some sweetness, has to be an unusual fruit addition. Quite wine like – a funky, ripe white. Tonnes of oak to taste and, other than a lemony acidity, again reminiscent of a natural wine."

In short: WTF? Time to read the info Will sent through...

So, it turns out it is an unusual fruit addition, with the medlar a rare beast with a long history variously described as "ugly", "unusual looking", and only suitable for eating once it's been "bletted", which appears to mean "allowed to rot", which in turn appears to have been done in times gone by via people leaving the fruit under their beds. As for Will's notes, he references a "cacophony of orchard fruits and white wine" before name-checking Grandma's baked custard and all manner of spices.

For me, as the beer warms, the initial after(shave)shock fades, sweetness and a gentle warmth rise, and you're left with a really rather pleasant, intensely fruity, funky, quirky little number reminiscent of a denser, heavier, less flighty Max, one of Van Dieman's estate ales. Well, that and knowledge of a fruit you likely never knew existed.