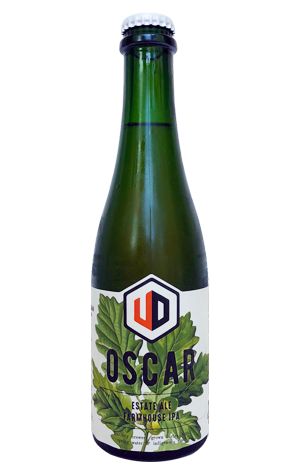 Over the past few years, Will Tatchell has been working towards the creation of a series of Estate Ales, beers brewed with ingredients sourced on his family farm in Evandale, a short drive outside Launceston. The first two examples – Max and Edward – appeared at the end of 2017 and now, with a small, onsite malting operation up and running, they're joined by a third, Oscar.

It's tagged a farmhouse IPA, one that features not just homegrown and kilned ale malt but raw barley, Cascade, Pride of Ringwood and Super Pride hops and the house yeast Everton. The choice of hops is rather less-than-fashionable, yet, as has been found when using some older varieties later in the brewing process, floral and fruity characteristics can be obtained and here there's some citrus and stewed stone fruit to be found in the mix.

There's also plenty of what you'd associate with a traditional farmhouse ale, with hay/straw aromas and flavours plus an earthy dryness that goes to work alongside the bitterness from the hops to create a beer that, while not as intense as Van Dieman's barrel-fermented IPA Duchess of last year, shares some of its funkier elements and sits apart from most beers you'll come across – even in this wild era.