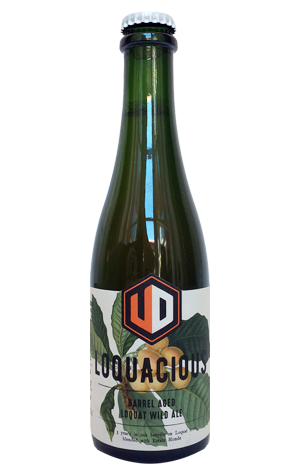 Loquacious is one of six beers released at the same time at the end of 2017 by Tasmania's Van Dieman, alongside three other barrel aged beers and the brewery's first two "estate ales". It's also the one of the six that, once it was poured into glasses, conjured the least initial excitement thanks to the presence of some "floaties" within the hazy orange liquid. Why were they there? Well, the beer – as hinted at by its title – contains loquat, a member of the citrus family. The fruit was picked from a tree on the Van Dieman farm and placed inside oak barrels for three years with a blonde ale, before being blended with a younger beer.

The initial wariness turned out to be misplaced – what's a few floaty bits of macerated loquat between friends when there's a beer this complex to tuck into? Heavily oaked like a buttery chardonnay and firing off funky wild yeast aromas, Loquacious follows up with intense, zesty orange sweetness, vanilla and berries, acidity and a tannic dryness underpinning it all. If you didn't know better, you could imagine a barman concocting such an experience at a high end cocktail bar, only delivering it with ornate decor, perhaps, instead of floaties.