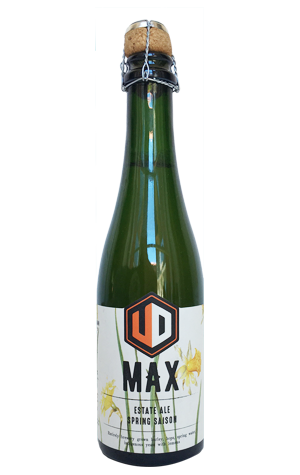 There's plenty that has Van Dieman founder Will Tatchell excited about his estate ales project. But, possibly, nothing has excited him as much as Max, one of the three beers he's producing with malt, water, hops and yeast grown on the family farm in Tasmania. At various times in our discussions about the project, Will has declared it to be "pure enjoyment", something he'd have "no problem drinking from 7am to 12am" (we're certain he hasn't got time to do so...), "a pure delight" and "Best beer of 2017. Period" – admittedly with the caveat: "Might be biased opinion."

So, what is Max and why is he so enamoured? He's a spring saison with the four core ingredients joined by lemons picked on the farm. He pours a hazy, pale yellow and is one lively little bugger. There's sharp lemon drop and lemongrass aromas upfront, with herbal, spicy characters lurking behind: kaffir lime leaf and other aromas you'd associate with a spicy Thai dish. The dominant flavour is of lemon sherbet, but there's more fruity, floral elements to uncover too and, despite its initial sweetness, the house yeast and brewery grown Super Pride and Cascade hops ensure it wraps up nice and dry.