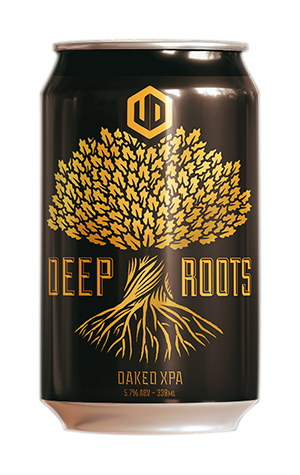 Even with the pace of beer releases remaining at such a dizzying speed, there's still ways to stand out with a new release – and that point remains true even when you approach a beer style so many of the country's other brewers have made. It feels like Van Dieman's spring 2021 release does just that; it's not only a left-of-centre XPA but a bit of a left-of-centre seasonal from the brewery too.

Often, the Tasmanian brewery's releases are expressions of their farm but – aside from wet-hopped beers – it's typically beer's wilder side that's on show; yet here's where Deep Roots has followed a unique path from inception to release. To understand the beer you need to go back to the first time Will encountered the experimental hop from the Yakima Valley’s Hop Breeding Company known as HBC 472. It's a close relative of Sabro and is known for its ability to deliver barrel-aged characters in a beer without having to use barrels: notes of vanilla, wood and coconut, along with more fruity or floral flavours at times.

A few years on from trying it for the first time and Mother Nature would play a part in seeing this beer become a reality, with a freak storm hitting the Tatchell farm and taking out a huge branch from a century-old oak tree that sits by the brewhouse. Not one who likes to see anything go to waste, Will chipped a portion of the fallen oak and threw some of it into the oven to partially roast, and some of it into their malt kiln to dry in order to savour the aromatic qualities from the freshly fallen English oak.

Those oak chips were then added during active ferment while Deep Roots was dry-hopped with both HBC 472 and Mosaic to showcase those American hops and Will's own English oak chips. And encapsulate it certainly does, bringing a substantial hit of vanilla from the oak and hops, along with floral, earthy and woody flavours and a bit of a more fruit-forward mix of berry and citrus. Add to that a substantial bitterness, textural mouthfeel and some slightly rich malt flavours you have an XPA that stands on its own. As if its roots run quite deep...