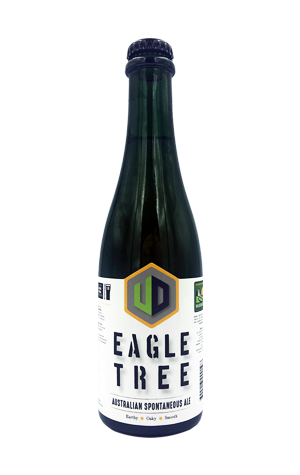 If you've been playing along with the Isolation Beer Festival celebrating Tasmania's indie brewers – an online affair in the time of COVID-19 taking place as I type these words – then you may well already be familiar with Eagle Tree; it's one of three beers brewer Will Tatchell has been selling in Isolation Packs and also the most recent in Van Dieman's lineup of spontaneously fermented estate ales. If you're not familiar with it, but you're a fan of such beers, you'll want to become acquainted before the 800 bottles are gone.

It's a Van Dieman release in which the liquid (and everything that's lived within it) is left to do the talking: no additions of rare fruits this time around. That said, when you're playing with liquids fermented in the brewery's coolship then aged in oak for between one and three years before blending, it's not as if you've hampered yourself when it comes to the breadth of your palette.

Eagle Tree pours a dense peachy-orange hue with next to no carbonation, like a lambic or traditional English farmhouse cider. Lovely, rich apricot aromas lie atop the oak, the vibrant, rustic Brett and hints of brine. There's a lively acidity throughout, but it's textural like the grip of a chardonnay rather than puckering, adding shape to a beer that's viscous and velvety. And really quite delicious.