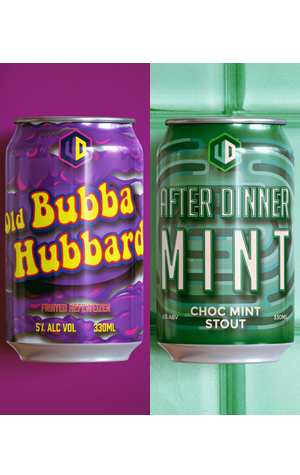 It appears Will Tatchell at Van Dieman, in Tasmania, has been pining for his youth, or maybe he's developed a sweet tooth, a reaction to the often dry and funky series of estate ales and barrel aged beers he released at the end of 2017? Whatever the cause, this pairing of beers sits snugly in the colourful camp.

Old Bubba Hubbard is the brewery's GABS 2018 entry, one that takes a hefeweizen base as its starting point and looks to end up somewhere in the vicinity of Hubba Bubba bubblegum via the use of El Dorado and Mosaic hops and plenty of local berries. Apparently the last of these were added in a "mammoth" volume, which would explain their dominance within this pinkish beer. In tandem with the hops, they keep the banana and clove characters you'd find in a straight hefe hidden, instead combining in a full-bodied beer to create a bit of fruity, creamy fun.

Long before starting The Crafty Pint, I used to enjoy creating two desserts as a kid. One was a microwaved lemon syrup sponge (essentially an excuse to eat raw cake batter and spoonfuls of Lyle's Golden Syrup); the other was peppermint creams, and it was the latter that came to mind when sampling After Dinner Mint with the aromas obtained from the use of candied mint conjuring memories from more than three decades ago. They're added to the beer along with chocolate and cocoa nibs from Cocobean and create a beer that does what it says on the tin: lifted mint aromas, dark chocolate and a touch of roasted bitterness to dry things out.