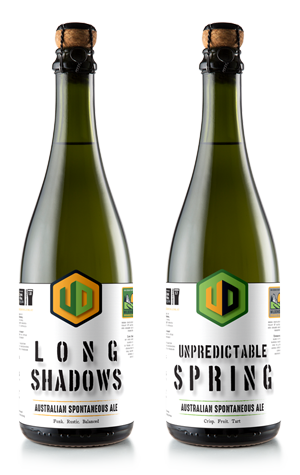 The transformation of Van Dieman from a farm-based brewery producing pretty normal beers, other than the odd one featuring ingredients from the Evandale property, into a brewery bottling the farm has been years in the making. The final step in the mission to produce 100 percent estate ales – brewed solely with ingredients grown, sourced and processed on site – was the firing up of a small malting setup, leading to the release of beers such as the trio named after founder Will Tatchell's three boys and the delicious Claude. Except that final step has a coda; while those beers were fermented with yeasts captured on the farm, the team there had also been building up stock of beers spontaneously fermented in coolships - large, shallow vessels – left open overnight to pick up whatever lives in the farm's microclimate.

The liquids – all created from estate grown malt and aged, homegrown hops – then spent time in French oak before being blended and released under the Wilderness Project banner as Australian Spontaneous Ales. The first two releases are the suitably evocatively titled Long Shadows and Unpredictable Spring.

Long Shadows is the more rustic of the two – a beer that tastes how you might imagine a farm in a bottle would – with earthy, barnyard characters running right through it. There's a fruitiness there, apricot perhaps, in a manner reminiscent of French farmhouse ciders, and a straw like dryness. Lighter and more ephemeral on the palate than you might expect, it's very much of the land.

Stablemate Unpredictable Spring is a flightier affair, a little lighter in its shade of cloudy pale gold and still possessing some oak and funky elements, but with ripe citrus and floral aromas too, not to mention some lighter lemony flavours. It comes with the sort of texture only time and the interplay of bugs and bacteria can conjure, with viscosity on one side jousting with a broad acidity on the other.

These things don't just take patience, but they come in small packages too: if this sounds like your bag, there's just 800 bottles of each.

NB The beers are capped, not cork and cage as in these mockups from the brewery, but I hadn't realised or taken photos before sampling...