Beer Van Dieman Here We Go Round The Mulberry Bush 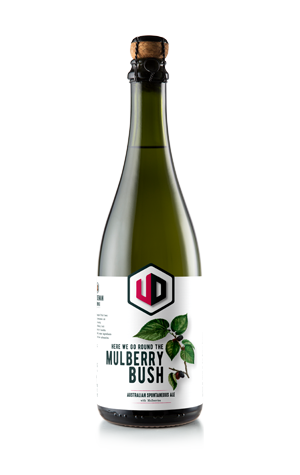 What is the world coming to? A fruited sour from Van Dieman in which I don't have to look up the name of the fruit to find out what it is – whatever next?

After releases featuring rarities such as medlar and greengage, this time around Will Tatchell looks to lead us a merry dance with mulberries. It's another beer from the brewery's Wilderness Project featuring spontaneously fermented and barrel-aged specialties; here, farm-grown mulberries have been added to liquid that spent close to three years in barrels before bottling.

The first thing to hit you is the colour: a vibrant, hazy strawberry blush. The next is the carbonation as it's practically non-existent, leaving the bracing yet soft acidic sourness to do the work on the textural front. What you'll take away more than anything, however, is the beer's potent funk. And this isn't the sort of mild lacto whiff we might describe as funky in, say, a Berliner Weisse. No, while there is some cherry berry fruit character within Here We Go Round The Mulberry Bush, this is very much an expression of farm in liquid form: distinctly earthy and akin to hanging out by the stables.