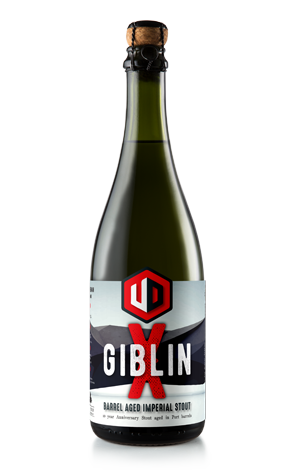 Giblin is the imperial stout that's been in the Van Dieman limited release locker for years. And, like the brewery itself, it's one that's evolving as Will Tatchell's farm-based, estate ale-creating operation moves into a second decade. No longer is it enough to put out an imperial stout brewed with water, malt, hops and yeast, this time around it's a case of homegrown hops and a full year in just-emptied Port barrels.

Clearly, the latter made their mark as the first comment by Will Ziebell of this parish when we shared a bottle was that the beer had distinct Port-like characters – and he wasn't at that point aware they'd been used. Aside from Giblin X's dark fruity side, its intensely black colour and deep brown head are, in a way, in contrast to its relatively light weight: it doesn't have the oily viscosity of many other 10 percent ABV imperial stouts, with a gentle acidity cutting through the body of the malt.

There's plenty to unravel, from cola to its tannic dryness, circling a roasty dark chocolate character that settles in on your palate and sticks around. All in all, it's a feisty number with which to celebrate turning ten.

Kegs rolling out at events over the second half of 2019