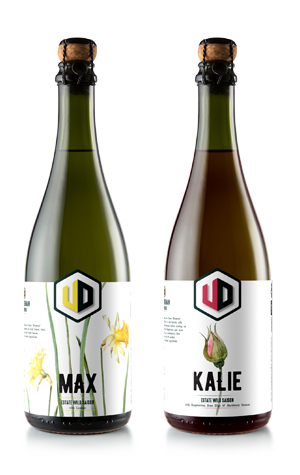 With their three kids already honoured with a beer in their name, now it's time for Kalie, Van Dieman founder Will Tatchell's wife, to join the pack. As with their offspring's beers, it's in the shape of another of the farm brewery's estate ales – beers created solely with ingredients grown, sourced and processed on their land.

But first, the returning Max, a beer that first appeared in 2017 and quickly became one of Will's personal favourites. Again, it's a combination of homegrown Pilsner malt and wheat, Super Pride and Cascade hops, their house "Everton" yeast strain, and lemons – both fermented on fresh lemon rind and matured in oak with fresh lemons. A pungent lemon rind perfume hits you first, heralding what's best described as a herb garden in blossom, which in turn makes way for elderflower, sarsaparilla and aniseed. Enjoying this hazy pale golden beer is like tucking into a delicate summer cocktail.

Which brings us to Mumma Beer, Kalie, a wild saison aged briefly in oak barrels with wild blackberry blossom, before resting on new season whole raspberries and farm picked rose hips. Pouring a soft cherry pink, it reminds me of a cherry-berry flavoured classy boiled sweet – the sort that came in metal tins which I’d pester my folks to buy from the shops at National Trust venues, only to be consumed on long drives north to visit grandparents in Scotland in the 80s (is that specific enough for you?) – underpinned by that herbal, cocktail like perfume familiar from Max. A delightfully unique pair.

NB The beers were originally released in February, but we got to them late. Also, the bottles we were sent were capped, not corked as in the images.