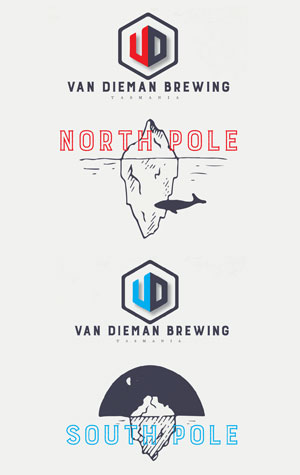 Another milestone for Van Dieman here. Years on from setting out to create "estate ales" – beers made exclusively from ingredients sourced on the family farm south of Launceston, here are the first beers that not only fit that bill but also featured brewery founder Will Tatchell's first farm-made specialty malts. Will has been producing base malt from barley grown and harvested on the land for some time; here, he's taken things a little further and created Munich, Crystal, Chocolate and Black malts, along with a handful of Roasted Barley, in order to brew a pair of porters.

It's been a time-consuming process; if you thought his floor-malting setup was pretty small, the kit on which he created tiny batches of this specialty malt until he'd amassed enough for a commercial brew is even smaller: it's a Fisher & Paykel oven capable of handling 5kg at a time. With enough goods amassed, however, he brewed two beers with similar recipes other than the yeast and fermentation temperature: a Baltic porter at 14C; the robust porter at 22C.

"Arctic Baltic Porter" North Pole used a German lager yeast fermented cool for six weeks, and it plays its role alongside the specialty malts. Pouring with a dark, creamy head, it launches into a display of malt gymnastics (Commonwealth Games on the brain?): there's roast, nuts, dark chocolate, almond liqueur, and nougat esters vying for attention. There's plenty of dark chocolate and roasted espresso bitterness underpinning proceedings too, while the warmer it gets, the more it settles into itself, nudging closer to a straight-down-the-line, roasty, smooth-natured porter / stout.

Heading to the South Pole with the "Antarctic Robust Porter" and you find the same blend of malts and hops brought to life by an ale yeast. It's instantly apparent this is a much flightier, sprightlier, jaunty affair. It's like swapping Eastern European introspection for something more sweetly approachable, with the more aggressive and uncommon elements of its sibling subsumed by chocolate, biscuits and toffee.

It would have been enough to put out a first beer featuring his own specialty malts; to add an extra layer of educational experimentation is a welcome flourish. Look out for the pair appearing side by side on tap at a handful of venues through winter 2022.