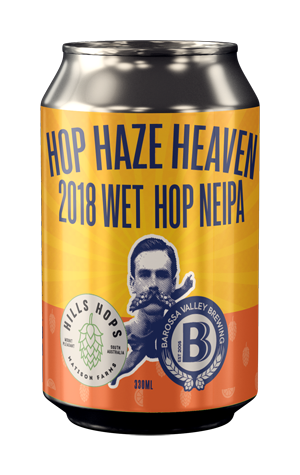 The change from summer to autumn in Australia heralds the start of the hop harvest and, with it, an ever-growing number of fresh hop beers featuring hops ripped from the bine and added to the brew as fast as possible. In 2018, Barossa Valley Brewing teamed up with Adelaide Hills hop growers Hills Hops and decided the best way to showcase their hop was via a New England IPA. The brew team helped pick Marc Guyatt’s hops, taking his entire Cascade crop back to the Barossa Valley. Within two hours of picking, the flowers were in the fermenter imparting their hoppy goodness.

The diversity of NEIPAs in Australia has ranged from those with a slight wisp of haziness to some so murky they're almost mud like. The Barossa Valley version has only a very slight haze joining its light orange colour. As expected, fresh hop aromas leap out of the glass: orange, tangerine, apricot and a slight grassiness among them. Medium to high levels of carbonation kick things off from the first mouthful, with more tangerine and stone fruit following and heaps of hop flavour coming through. The bitterness is strong without overpowering in a beer that allows the Hills Hops shine, concluding with a really dry finish.

The team collected enough hops to create a small batch of 1,500 litres, with 120 cartons of cans being sent out nationally. To celebrate the beer's release, owner Denham D’Silva and his brew team are doing a pub crawl, tapping the new beer at a variety of key venues, one after the other. If you're reading this in time, you can join them at 5pm at the brewery in Tanunda or at NOLA (6.15pm), Sturt St Cellars (7.10pm) and Franklin Hotel (8pm).