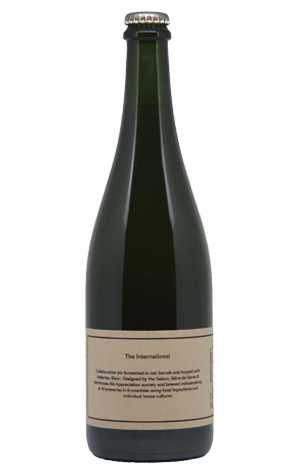 On the anniversary of their first year of existence, Wildflower has released its first collaboration. It’s not a hands-on collaborative effort in that no one else actually came to their home to get their hands dirty. No one even bothered coming around to chat. Instead, it’s the result of being part of the rather niche sounding Saison, Bière de Garde & Farmhouse Ale Appreciation Society, a group that counts amongst its active members some of the most renowned producers and enthusiasts of those beer styles from around the world. Ten of those breweries, spanning eight different countries, decided to make a beer based on the same recipe but using their own house yeast and local ingredients as the means of expressing their unique take on the beer. While it would no doubt be interesting to try whatever the other breweries in the society came up with, it’s hard to imagine they’ve done any better than Wildflower’s effort.

Called The International, it was brewed back in February using grains from NSW maltsters – barley and rye from Provenance and wheat from Voyager – and Hallertau Blanc, Strisselspalt and Motueka hops. Then they added their house yeast culture, transferred it to French oak barriques for a month, dry hopped it with more Hallertau Blanc and popped it into bottles for three months. That’s brought about a beer with more up front intensity than those for which Wildflower has become known. There’s more hop character, more acidity and more bitterness, but everything entwines beautifully. While delivering a full serving of lemon and citrus aroma and flavour, plus some gently spicy yeast character, it remains exceedingly clean and well balanced with a most generous and satisfying, thick and creamy head.

Because The International is a one-off beer, rather than a continual progression like the flagship Gold and Amber blends and the recently launched Solera series, it appears in green bottles with distinctly simpler labelling. But don’t be put off by what appears to be no-frills packaging – it’s what’s inside that counts and what’s inside is well worth getting to know.