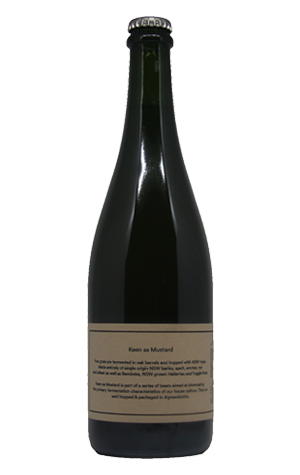 For the first in a new subset of releases, Wildflower has decided to eschew its usual naming convention – the one which has seen beer given titles inspired by Greek characters, Saints and children (or both) and the occasional ancient ageing process – in favour of becoming an enthusiastic adopter of Aussie colloquialisms. First up: Keen As Mustard.

In principle this beer has gone through the same process as all Wildflower’s flagship blends; primary fermentation in barriques, secondary fermentation in bottles then many long months sitting around waiting for it to mature. Where it’s a bit different is (a) having a slightly shorter primary fermentation, (b) being the first time they’ve used Emmer – an ancient form of wheat – as part of the grain blend, and (c) having a higher proportion of NSW grown hops.

The resulting beer is a light delight. Appearing bright gold colour with a delightfully fluffy and foamy head from a bumped-up carbonation, it bursts with sweet citrus aroma – the kind you associate with some orange-fuelled soft drink you would enjoyed as a child but can’t quite recall the name of. It’s not sweet on the palate though, the orange erring towards the bitter side with a tart wee tang and a dry finish.

You could argue that Keen As Mustard isn’t as sophisticated as, say, the Gold blend, but that’s kind of the idea – slang fits a different purpose, one that’s less formal and more approachable. But that doesn’t necessarily make it low brow. Given the proper occasion, slang is perfect. And Australia has such a deep well of fair dinkum, top notch slang to make use of. Now, so too does Wildflower.